What could be more flattering than being asked by your Alma Mater (and a prestigious design school at that) not long after you’ve graduated, to overhaul a part of the campus? Tom Surman, Joseph Deane and Percy Weston were asked to complete that very task by the Royal College of Arts.

The driving force behind the redesign of the too-small student cafe was to incorporate warmth into the existing stark concrete and steel space. The space was moved to a former seminar room and an existing suspended ceiling torn down to construct a wooden framework around the walls.  Timber fashioned from reclaimed wood was used extensively throughout, from the kitchen, shelving and tables to the recycled parquet flooring.  “The cafe is conceived as a playful timber box inside a large concrete and steel shell,” Surman told Dezeen. “We made the entire structure from ripped-down scaffolding boards and we refined them until they were almost unrecognizable. It’s a very playful project, intended to reflect the slightly obscure nature of the sculpture department next door,” added Surman. “In this building, anything too precious starts to look terrible after a couple of weeks.” Keeping with the cost friendly and reclaimed nature of the project, recycled mismatched schoolroom chairs were used around the dining tables.

The team designed and installed the entire project in just three months and did a surprising amount of work themselves. “The nice thing about having an incredibly tight budget was we learned to do stuff with our hands,” said Surman.  The trio has since launched their own studio named Weston Surman & Deane Architecture. 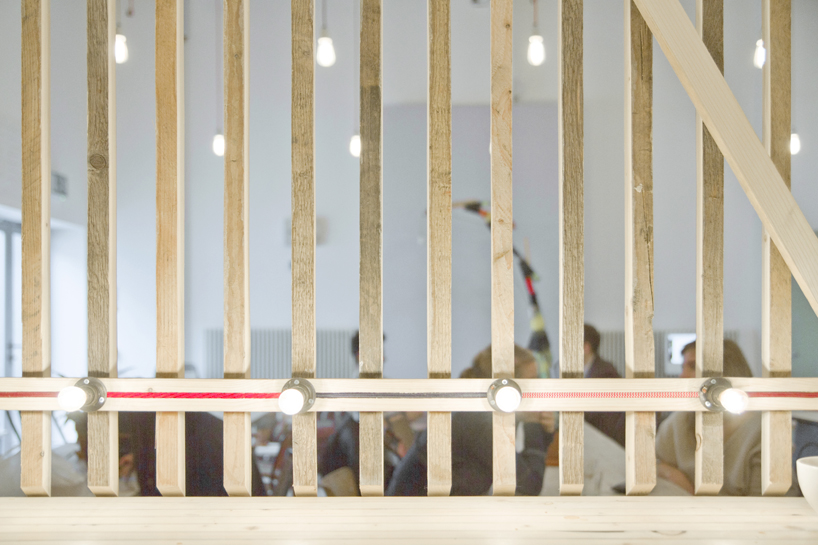